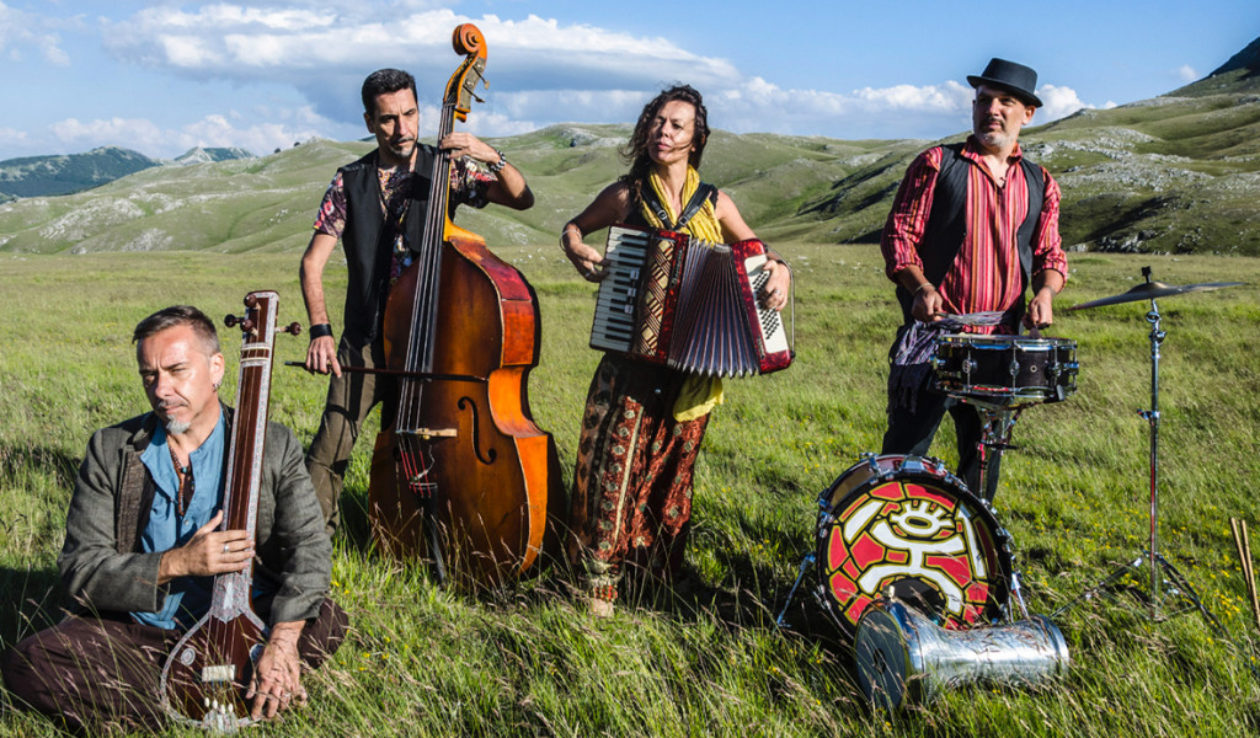 Our story starts at the beginning of the nineties, down the lively streets and the ancient squares of Rome. Our choice was very clear: playing on the street theatre searching for love, joy, freedom, poetry and -most of all- looking for truth.

The word Zulu means “People from the sky”. We started with this warrior name wishing to search, communicate, dream and above all to transformate something within ourselves through the strong energy of the music. Music is vibration, encounter with the other, exchange, possibility of growing up, evolution. Music breaks walls down; the walls created by religions, ideologies, ethnicities. The race is one: the Human Kind! This is the reason why we keep on playing music together on the road and we let ourselves be influenced by the sounds flowing in the air. Movement is life, wealth, knowledge.

In these years we have been playing all over: hundreds of street concerts, underground stations and clubs, reaching the most beautiful theatres, television (RAI), and wonderful festival venues such as Rome Cinema Festival, Music Fest in Milan, Extrafestival in Turin, Asti Musica, Roma incontra il mondo, 5th World Summit on Children and Media in Johannesburg-Southafrica, Dilli Haat in New Delhi-India.

From January 2007 the band works in India and Italy at the project NOW Nomadic Orchestra of the World, collaborating with Chinh India, a Delhi-based organization working on the field with nomadic folk musicians in Rajasthan.

The goal is creating an artistic and cultural bridge with musicians from nomadic communities to bring a message of peace and encounter between different people through the language of music.

The first concert of the Nomadic Orchestra is in May 2007 at the Dilli Haat Cultural Center in New Delhi.

In March 2008 NOW plays at the India Habitat Center Auditorium in Delhi and in 2009 NOW project performs in Italy with the Caravan Tour playing in the most important world music festivals such as Roma Incontra il Mondo, Sconfinando Festival and Itinerari Folk.

December 2010: NOW INDIA TOUR – In collaboration with Chinh India, the Italian Institute of Culture in New Delhi and the Italian Embassy in India, NTZ present their Indian Tour. For the first time an Italian rock band meets the Indian audience: Nuove Tribu’ Zulu perform with NOW – Nomadic Orchestra of the World in the major Indian cities, from New Delhi to Chennai and Mumbai all the way to the futuristic Auroville. With the Italian tour in 2009, the project was awarded the prize Suoni di Confine (Sounds of Borders) by Amnesty International and MEI (Independent Labels Meeting) as Best Live Project of the Year.

Workshops in South Africa – Johannesburg, March 2007: the work started with the project “A Song for Peace” in Italian schools leads the band to the 5th World Summit on Children and Media together with the FNSI (National federation of Italian Journalists). A workshop run by NTZ at the Afrika Cultural Centre, permanent artistic hub directed by the artist Benjy Francis, with thirty kids coming from Cosmocity, a township in Johannesburg. The lyrics, the emotions and the relationship with the children are some of the aspects that made this experience unforgettable. 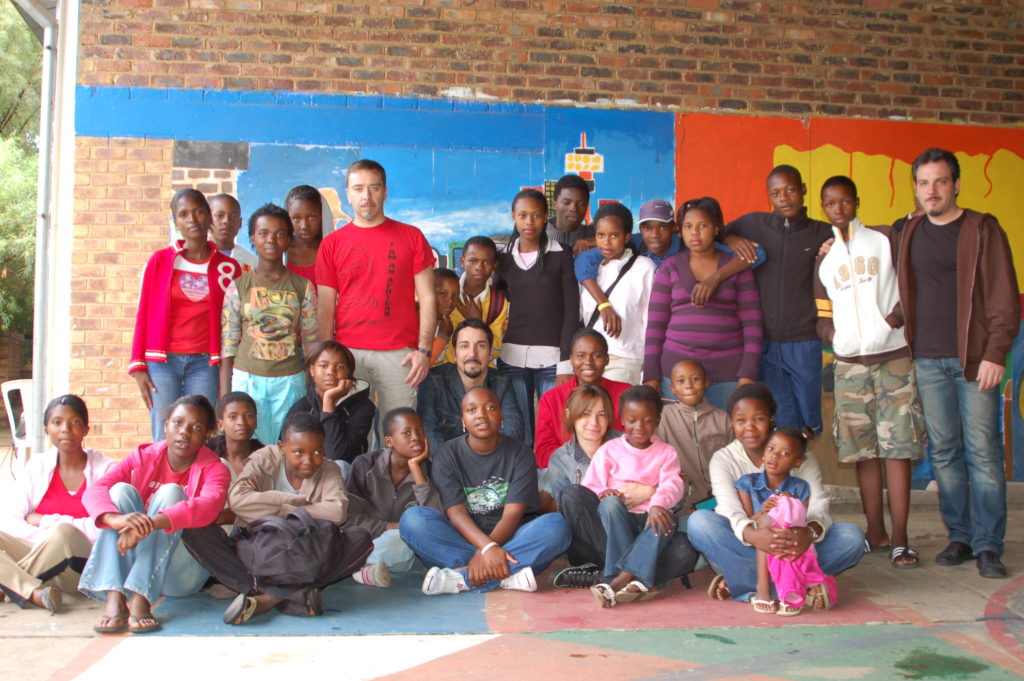 NAMASTE’ OM SHANTI EP (2016) Inspired by the Hindi word that is a symbolic gesture of greeting in India – this EP confirms the route of Cross–World–Music taken by Nuove Tribù Zulu. Experimenting without borders has always been the goal of the band: mixing life and art, personal stories and inspirations to create a sound journey in order to build a bridge of meeting and knowledge between worlds and cultures. Pejman Tadayon from Iran and Sanjay Kansa Banik from Calcutta, India, have participated joyously in this new work, released with the label Filibusta Records. The EP contains two new songs and two remixes by the Italian DJ NeroloZ, thus enhancing a really unique blend between Mediterranean, Middle Eastern and Indian sounds.

DIARIO NOMADE/NOMADIC DIARY (2014) contains a selection of the previous CD’s tracks sung in Italian – plus four precious original songs that were waiting for the right time to come out of the band’s treasure chest. The new songs represent the beautiful moments of the time spent in the valleys, the temples, the houses in the Rajasthani desert. A wonderful experience lived out of the passion for a broad music research that the band wants to share now in its own mothertongue: a journey to India, a holy land that opens up the door to a profound dimension of soul’s string and transforms life. The four new songs, unpublished till now, are stories and notes written and recorded during the caravan’s journey, on the dusty streets and the uncertain routes of this surprising country.

BANJARA!, (2012). This work provided tremendous feedbacks after the number of concerts realised by the band in Italy and India with the idea of sharing a message of union among different cultures and of establishing a musical and creative bridge between two millenary cultures. Nuove Tribù Zulu’s Italian folk met the nomadic folk of the Rajasthani desert tribes, creating the basis and the inspiration for a music with no borders and no more genre divisions. A beautiful jugalbandi of acoustic, electric, electronic, folk, rock and progressive sounds.

GENTE DEL CIELO / People from the Sky (2007) is an extraordinary zingaro journey among gipsy sounds, folk-rock accents and passionate Latin groove. The 13 tracks of the CD follow each other throughout the unique acoustic sound of the band and the strongest energy episodes give space to intense arrangements and to a peculiar taste for melody. With this CD NTZ open their gipsy suitcase and tell about their last four years of social and spiritual struggle with irony and delight through India, Africa and southamerican frienships. In Andrea Camerini’s lyrics the theme of journey comes out strongly as a kind of initiation to the restless search and to the spirit of adventure that always been the main feature of this band.

L’UNIONE DEI MONDI/The Union of the Worlds is the second CD, released in 2003. Musica, the weekly magazine of the eminent daily newspaper La Repubblica has ranked it as one of the best 100 CDs released in the world during the year 2003. After these years of intense live activity, the band has improved its characteristic bohemian masala-road style where the folk busker and Latin Mediterranean identity of the origin merge with the language of world music and the finest expression of rock and jazz. The band has already won prizes and awards for its original and creative crossover style. The most important prize won is Premio Lunezia for the literary value of the lyrics.

SULLA STRADA/On the road is the first cd: an independent production released in 2000: it’s the diary of a 10 years long journey. Balkanic rhythms, Mediterranean sounds, jazz, blues and rocknroll punk merge and get mixed with polka and tarantella creating unforeseeable and overwhelming sound ways balanced between tradition and modernity. 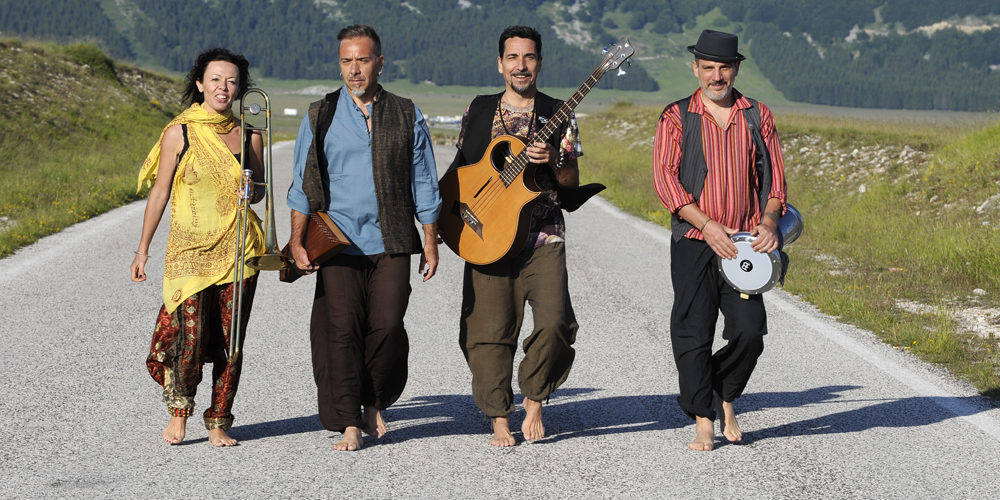 Directed by Francesco Cordio and produced by NYZ and Teatri di Nina, September 2016

The band meets Coro Mani Bianche Roma (White Hands Choir Rome), composed by deaf and hearing people of all ages. They perform a special interpretation of the song “Namasté” with LIS (Italian Sign Language), thus giving life to a unique experience. The video was released during the International Week of the Deaf, organized by the World Federation of the Deaf (WFD). The band and the Choir performed the song in front of a 10,000 people audience on September 24th, at the arrival of the march held in Rome by deaf and hearing people in this very special occasion. 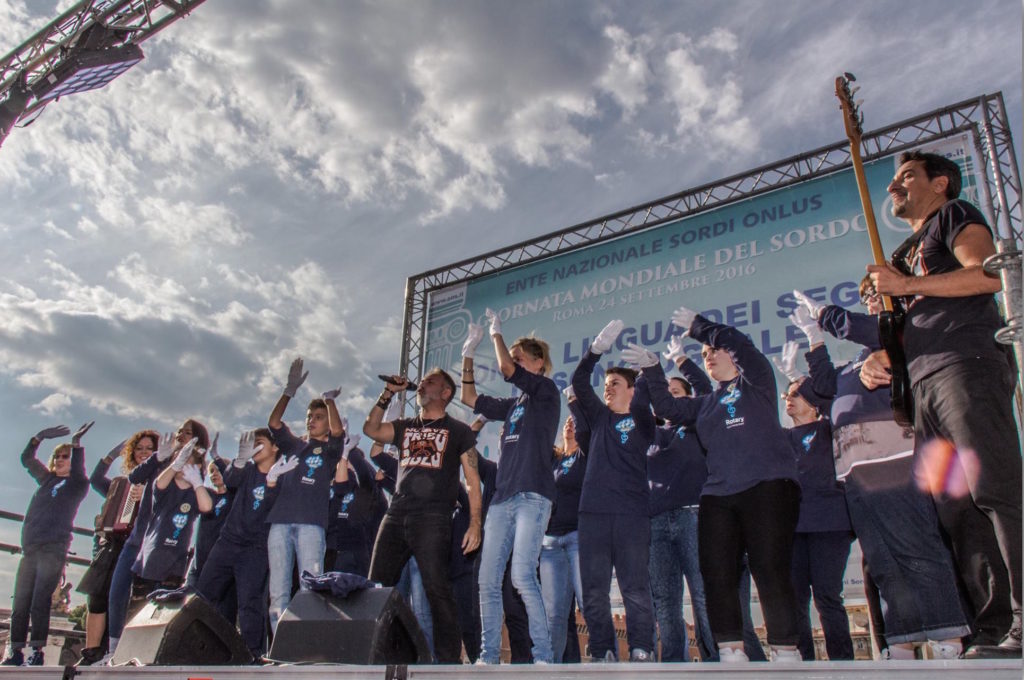 Verso l’India
On the road from Pondicherry to Mumbai: a new chapter of the band’s fascinating journey. From the album “Diario Nomade”.

The subject is a strong complaint about the corruption and lack of honesty Italy is struggling with. This song is a biting anthem coming from the hearts of fed-up people. But there’s still some hope: “I have seen people in the streets fighting the hypocrite power and bringing back Peace and Truth…”.

Shot during the summer 2001, the song is dedicated to a gipsy Khorakhané community in Rome and it was shot right in that settlement. This video has reached the final phase of the Independent Brands Meeting 2001. 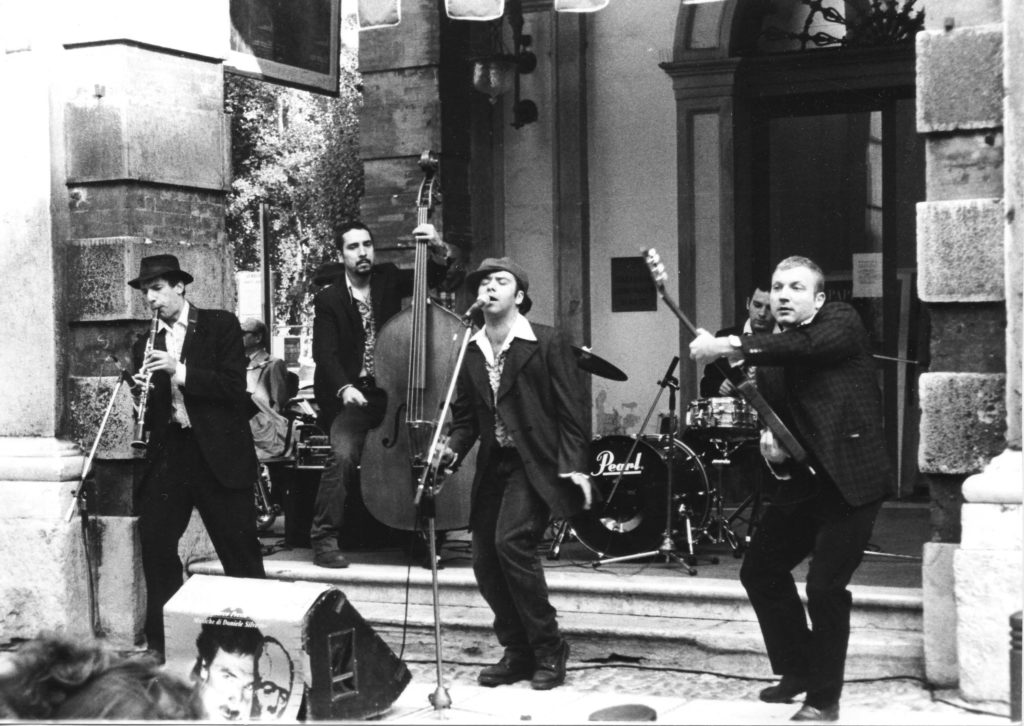 During the years NTZ realised music and themes for TV and soundtracks for documentary films and cinema.

NTZ experience at the World Summit on Children and Media 2007 was one of the most important among the ones that helped us grow in our work with children and youth.
At Afrika Cultural Centre, created by Benjy Francis, the band meets 30 kids from Cosmocity, a difficult area in Johannesburg.

Broadcast and produced by RAI 3 for EBU, European Broadcasting Union: the story of a young gypsy dancer living in a camp in Rome. In 2012 the band is awarded the Prize for the Best Soundtrack at the 9th Golden Wheel Film Festival 2012 in Skopje, Macedonia. Written and directed by Laura Di Nitto & Andrea Camerini – Filming by Mario Pantone, Pierpaolo De Luca and Marco Belati – Editing by Francesco Cordio. Original Soundtrack by Nuove Tribù Zulu.

Broadcast and produced by RAI 3 for EBU, European Broadcasting Union: the story of a boy from L’Aquila who faces the hard times of the earthquake that hit Italy in April 2009. Written and directed by Laura Di Nitto & Andrea Camerini – Editing by Laura Di Nitto –  Original Soundtrack by Nuove Tribù Zulu.

Broadcast in the prime time slot by “Voyager” RAI 2 : a film about the mystery of the ancient palm leaves that  are preserved by astrologers’ families in South India.  Directed by Laura Di Nitto, Andrea Camerini & Marco Belati – Music by Andrea Camerini & Paolo Camerini –  Produced by H25 – Media Agency.

Short documentary film realized for the project “Crescere al Sud” (Growing up in the South) founded by Fondazione con il Sud in collaboration with Ministry of Justice with Department of Juvenile Justice Policies.

Gnu (1999) Broadcast by RAI 3 – Theme song and music by Nuove Tribù Zulu. NTZ was the resident band of the TV programme playing live in studio. 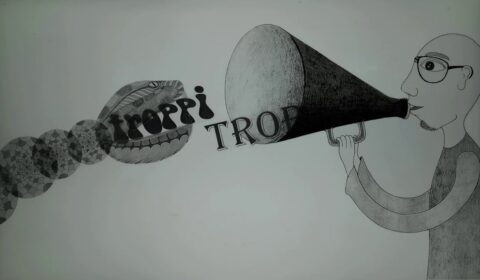